As parents of a college freshman, navigating our first (and possibly last) Family Weekend had its fair share of challenges. Working in tandem with our college student made the logistical planning difficult, but it was the emotional hurdles of the weekend that were unexpected.

In the planning phase, I had the audacity to attempt to get my daughter’s input on numerous scheduling choices. Questions such as, “Should we go to the game?” “Which parking lot should I buy a tailgating pass for?” and, “Will you want to have dinner out both nights?” were met with annoyance.

“Mom, you are sending me way too many messages about this!”

“Sorry, I thought you might actually want to tailgate in the same lot as your friends and their parents.” (Big sigh.)

My husband, my two younger daughters, and I road-tripped to campus on Friday, arriving in the late afternoon. From the moment we were reunited in our freshman’s dorm room, it was a rollercoaster ride of highs and lows. We learned some glaring “Don’t’s,” including some that really stung. We, as parents, made mistakes, and so did our freshman. For example:

During Family Weekend college students should not:

During Family Weekend parents of college students should not:

In retrospect, I can see that we are still in that phase of separating. She is becoming an independent adult, and we are grieving the loss of her in our home and under our wings. It is a strange and disconcerting feeling, watching your child build a life that you are not part of. It’s hard to admit being sub-consciously jealous, wanting to be a part of it all, and feeling terribly left out. Even worse is the ache in my heart as I remember her as a baby and realize that the bond we formed is becoming slack.

With all the mistakes that were made and feelings that got hurt, it was surprising how hard it still was to leave her. Maybe because, unlike at move-in day, her sisters were there this time. She cried like the baby I remember so fondly, and her sisters were nearly inconsolable. Instead of walking into her dorm without looking back, she was still watching us go as we slowly drove out of sight.

In the days since that weekend, we have returned to the pattern of contact that we had briefly become accustomed to. She texts when she needs something, or when she is excited about something, or when she is nervous about something. There is no residual anger or hard feelings from the missteps made. I expect that we will get a Facetime call from her this weekend, the one where she really just wants to see her baby sister and the dog.

This letting go is a process marked with milestones, and we made it through another one. More and more, I see that this is the start of a new stage in our relationship, a relationship that will never be what it once was. Now she can become who she was meant to be, and we can show our love by letting her go.

What Parents of College Students Should Not Do

Doug Adriane Heine lives in Northeastern Pennsylvania with her husband, three daughters and lab mix. She is an adoption social worker for children in foster care. Her writing has garnered four Keystone Press Awards from the Pennsylvania Newspaper Association. She is passionate about helping children, doing as much yoga as possible, and sharing cool experiences with her girls.

Your Kid’s Off to College and You’re a Mess. Here’s When You’ll Be OK

When my firstborn left for college, I was so ready for it (or so I thought.) I had read all the advice columns on how to properly and maturely wade my way through these unfamiliar waters. I read about all the right things to say and do at drop off, what to buy and what… 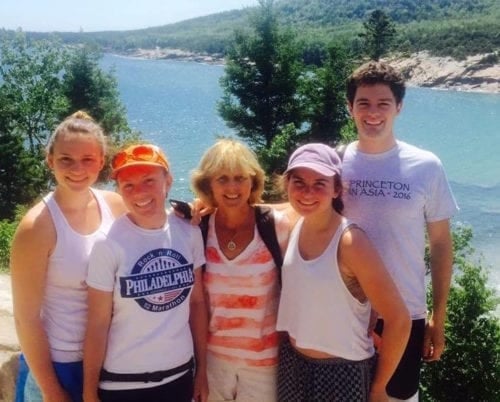 Take Time to Grieve After You Drop Your Kids at College

I remember four years ago August very clearly. The focus was on my oldest daughter Carly going off to college. She was only going an hour away to Monmouth University, but I still felt sad that she wouldn’t be living at home anymore. Don’t get me wrong; I also felt happy, proud and excited as…