Being a teenager in today’s world is, for lack of a better word, fast.

As a 15-year-old sophomore attending a fairly densely-populated school, I’d be willing to call myself at the very least familiar with the ins and outs of how young people interact with both school, and more importantly, each other on a day-to-day basis. As it is with the rest of the world, that interaction is deeply interwoven with the constant stream of information (and misinformation) that surges out of every phone and laptop screen as soon as you press the power button.

As a result, things that used to take days or hours now take minutes or even seconds to happen. Basically, we can all attest to the fact that sometime, somewhere, the world of a teenager entered ludicrous speed. With all this change comes the point of all this rambling: social media.

Those two words have become a massive controversy between parents and teens for years upon years. Some see social media as a dangerous outlet for popularity contests where nobody wins while others view it as a place to share their ideas with far more people than they could ever do in person. I’ve been on both sides of that argument.

Up until January of this year, I was not on any social media platforms besides iMessage on my phone. I got by, sure, but after a while, I knew it was time to make the jump. Around the first of the year, I posted my first Instagram picture. Ever since, I will be truly honest and say my social existence has improved dramatically, which is why I’m here to share my experience with what I think parents should know about social media.

5 Things for Parents to Know About Social Media

1. We Are Capable of Putting the Phones Down. Seriously.

One of the biggest stereotypes about teenagers is that we always have our face glued to a screen and have no idea what a tree is. Don’t get me wrong, I do love a good phone screen, but this is, a lot of the time, inaccurate. The first week I downloaded the Instagram app, I was immersed, sure. But after a while, it just became another tool in my life to communicate with my friends and yes, family.

I can tell you with absolute certainty that my relationship with my mom has not changed in the least in-person and we connect with each other nearly daily over Direct Messaging. So stop being so concerned about your kid slipping through your fingers; they’ll still be there after they’ve reached the bottom of their refreshed feed.

I recently had the pleasure of going to a PR event for Instagram for a discussion on how teens and parents connect on the platform. As the panel, featuring a bunch of awesome people who both make and occupy IG, proceeded, I learned things that I had never really known about the medium. One thing that particularly impressed me was a customizable filter that you can use to automatically remove certain phrases from your comments. This is just one of the growing number of features geared towards this kind of protection, because the people in charge of the entire company want nothing more than to see their users have a good, fulfilling time on their site.

3. We Have Heard You About Stranger Danger and We’re Listening.

The Internet has really bad people in it and we know that because you’ve told us. All our lives we’ve been taught to be wary of all things stranger and it may surprise you to know that we’ve been paying attention. You had better believe that the profile labeled as a 95-year-old man with the profile picture of a woman is gonna get hit with the block. Your account can be made private so you can regulate the flow of people who even see your content to only those we are perfectly comfortable with. With social media, you have control. Not the other way around.

4. The Social Interaction Is Invaluable.

For years and years, my social life consisted of talking to kids in my classes at school until the final bell rang and then just keeping in touch with just a my tight circle of good friends. I’d come back the next school year with a giant reset on just about everyone and started from scratch. Who knew that nobody does that anymore?

This summer was a totally fresh experience and I loved it. All summer I kept contact with so many people just by commenting on posts and replying to their stories, making for great small conversations that were just perfect. Once I came back to school this year, it was almost like I’d never left. This particular effect of having an Instagram account surprised me and I’m here to say that it is something very much worth considering.

5. Social Media Has Helped Me To Connect With People Who Inspire Me.

I make videos. I hope to enter a career in the field and I spend hours upon hours making short clips that I post on my account for all to see. Sometimes, I hit a block with the challenge I want to tackle next. Over the last year, I have started turning to Instagram to find that inspiration that I need. I follow various accounts that post everything from their own work to quick tips on anything and everything. It has really helped me to find a community of people who make me strive to do better as well as make me feel part of something more than just my own self. It’s a really great feeling.

It is safe to say that people connect with each other much differently today than a mere twenty years ago. Kids simply do not interact by corded phones and letters with the advent of cell phones. Keeping a teen restrained from exploring their social existence is impractical nowadays. Just remember that you’re not handing your kid off to adulthood in an instant. It’s simply time to start connecting with them in a way they will listen.

The Best 10 Tech Grad Gifts Your Kid Will Love 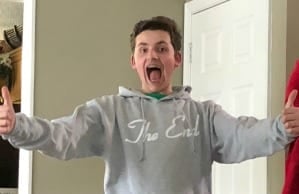 Joe Burke is a 15-year-old creator who makes videos like it’s his job. He hopes to turn that passion into a career in film. He also writes the occasional word or two, especially when his mom asks him nicely. Basically, he spends his life spilling creativity everywhere. You can find him on Instagram as @joe_burke0227.