I have lost my job. I only just realized this today.

It happened so gradually that I didn’t even notice the signs – though clearly I should have. Like many who work in the same position for a long time, I’d become awfully good at it, and I took a lot of pride in the work I did.

It had become a big part of my identity, too, even as I might be heard to complain about its duties, its low pay, its thankless, never-ending tasks, especially around year-end. I guess it was because I’d held the job so long, and had considered it so completely mine, that I failed to notice how much had changed.

Which is why it was a bit of a shock to realize that I had, some time ago, been replaced. It was a very cold day and I was in the workplace when it happened, which is to say in my red car, where I sat with my hair a tousled mess of heavy sleep and early Pilates class and without the benefit of makeup which might have resulted in some color in my otherwise jolly cheeks.

I did not wear a belted and pelted red coat, but instead had stuffed my chubby body and totally unacceptable outfit into my black puffy one, its promise of Arctic warmth outweighing any suggestion of either shape or style. It was too long for my elfin stature and hid the above shortcomings less well than I liked to believe; the overall look was more busted open tube of crescent rolls than Christmas hero. But that was ok, I told myself: only the work mattered! and I was working!

I glanced down at the handwritten list in my hand – culled from links sent to me in emails by my clients (kids), clandestine research about my clients’ (kids’) interests, and my own brand of expert, compulsive brainstorming – and sagely reminded myself of the importance of reinforcing the Nice behaviors while overlooking the Naughty.

And then I got a text, from a person so special to one of my adult children that she is of course special to me, too. She asked if I needed any shopping ideas for him – he who is my first-born and her beloved – which I totally did, because he is hard to buy for, and also because, despite my protestations, he has not given me much to go on.

She gave me some great ideas I would neither have known nor thought of, things she had ultimately decided against but knew – presumably from her own professional growth in the role – that he needed, or otherwise might enjoy. I texted back my thanks and added them to my list. Nice!

But just then a vague heaviness descended on me. I thought it might be the cold and cranked up the dashboard heat. The truth came to me like the warm air – slowly, stinging a bit at first, bringing a change that was swift and undeniable.

The truth is that I do not know, anymore, what he most needs in his day-to-day life, what he might have mentioned in passing that he could use. What new hobby he might be tentatively exploring, what might really come in handy for his ride to work. Though for decades, I was the only person on the planet who knew all of his sizes, I now can only make an educated guess at a few. I cannot remember which shoe size is his and which is his brother’s. Someone else knows these things much better than I do.

All of which led me to realize that I am not Santa anymore.

It was a really good run, while it lasted, which was 27 years or so – although maybe it was much less than that; I realize with embarrassment that I am not really sure how long I have been showing up at this job unnecessarily. I wonder if I am like the octogenarian partner at the firm, arriving each day to his corner office, blissfully unaware of his obsolescence even as his younger colleagues notice with a chuckle while on their way to actual work meetings that he is again asleep at his desk.

There will be no retirement party or even a roast; I am certain there is no severance. There is just me, jostled from my sleep by reality, drool on my lapel. Unceremoniously packing up mementos of my lost career, and slinking out of the building with my box. Wondering where the time went and where, in retirement, I might use my hard-earned expertise, that which is known by all moms who have similarly done this job.

We know – without knowing how – to take note of the clothes that our kids are outgrowing, the budding interests that are emerging, the playthings they’ve been coveting. When a child might need a book a little too hard, or a toy a little too young, just to remind them that there is room between the lines.

We have written tags on Santa packages in loopy, oversized cursive so elaborate that even skeptical children will declare that it is not Mom’s handwriting at all, they know what that looks like, and that Santa himself must have written their name right here on this paper.

We can convincingly claim to have forgotten something and run back into the house, as  their conspiring father distracts the children dressed for church on Christmas Eve, and surreptitiously place old-fashioned looking brown packages wrapped with string on the stoop, their contents of pajamas destined to be magically discovered on our return.

We have experience setting up dollhouses with convertible cars to match, and play kitchens with food that velcros back together after being cut through with a plastic knife. (I can tell also you that – even in the middle of the night when you and your husband are exhausted and hollow-eyed and fighting because they took so much longer to put together than you expected – these play versions of houses and kitchens are much more fun than the grown up kind that I am left with today.)

Some of us have also declared with conviction to little boys every day at breakfast that they had better come up with something on their list besides Nintendo Game Boys because they are Not Getting Those and then, mere moments later, after they have left for school, raced to Target to check the night’s restock for the handheld games, and have repeated this exact process every day for weeks. (I will add that I have also kept quiet about this reality for years, allowing gleeful children to actually believe that Santa pulled rank even when Mom said no and that I was merely gracious in defeat.)

And then, each time they came to me quietly, sometime after the tree came down, a sadness behind their eyes, I knew that they knew.  And then there was nothing to do except wrap them in my arms and wish I could protect them from this painful truth, from the loss of a magical age. It was the first time their hearts were broken but I knew it would not be the last, which broke mine. And as we sat together, our hearts broken but still and again beating together, as they had so many years before, I told them the whole grown up truth: that the magic of being Santa is perhaps the single thing in the whole world better than believing in Santa. That they – that we – would always have that kind of Santa magic, together.

Neither the skill set nor this resume, the vestiges of my years as Santa, are good for much now; I know. I think I just wanted to remember. I know that it is over, and that it is time to pass the torch. I know that the next generation of Santa is ready and up to the task. That they, too, will do a great job.

I just wanted the chance to say, once more: I had the time of my life, being Santa. 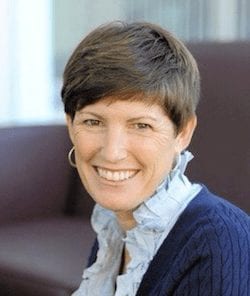 Beth Thompson writes from a not-quite-empty nest in an old farmhouse in Maryland, where she can also be found knitting, fielding texts from her three grown up children, and lazily reminding her youngest daughter that this is not her first rodeo. You can find her on her blog, Quivervoice, and on twitter.