Lisa writes: Growing up in the 1970’s, in a swirl of social change, it was easy to see that the world we would inhabit as adults would be radically altered from that of our childhood.  So far, this has proven to be true. But humans only change so fast and there at things that remain unaltered and leave me wondering why. Ask a group of married woman what the most important decision of their lives was and a large number will say it was the choice of a spouse.  Yet women wait for men to ask them for their hands in marriage.  We grab the reins of our lives pursuing education and employment and in both we demand to be treated as equals.  And then, we wait…for a ring, for a proposal, for him to make up his mind…and leave this crucial moment in our lives in the hands of men.

Title IX was passed in 1972, thereby requiring that girls have equal access to athletics from kindergarten through college.  We urge our daughters to participate in sports and stand on the sidelines cheering them on.  And, yet, the audience for and interest in women’s sports is a tiny fraction of that of men’s athletics.  We give women’s sports our money, but not our interest, why?

My children studied history, English, math, science and foreign language in high school. They studied the exact topics in the exact same order that my parents had, more than half a century earlier.  I admit to knowing nothing about education, but I know that our world and the job market have changed radically and yet, nothing about the way my kids were educated reflects those seismic changes.

When my sons go out with girls they pay.  I have taught them to do this while, at the same time, teaching them that women are completely equal and should earn as much as men at any job.  They go to the gym with their female friends and run miles, lift weight  and then, as they are leaving the building, they do as I have taught them, and hold the door. At the very least I gave them a mixed message.

I easily drive three times as far as my husband over the course of a year.  He works nearby and like many SAHMs I run a virtual taxi service.  Yet when we are in the car together, he drives, as if somehow he is the more expert driver.  Our experience is both typical and difficult to explain. When women and men drive in a car together, why do men drive more often?

No matter how many different ways a woman can find to make herself more beautiful, someone always invents another.  We revere natural beauty and leave no part of the female body unaltered.  Over the course of my life, I have seen more and more time, money and anxiety directed towards a woman’s appearance.  How many hours a week does a women devote to improving or thinking about improving her appearance, including beauty, diet and clothing?  Yet my husband and sons are doing no more to make themselves attractive/presentable than my grandfathers did in their day.

Many couples have joint checking accounts, women work and earn salaries but it seems, more often than not, men pay the check, monitor family finances and complete tax returns. We women work on Wall Street, get degrees in accounting and bookkeeping, work as bankers and run swaths of companies (as per Sheryl Sandberg’s description of her own life) and then we come home and let the men in our lives manage the money.

It never occurred to me that the massive social changes of the late 20th century would mean that some things would change beyond recognition (e.g. the number of women in medical school) and other things barely at all (e.g.the number of women CEOs).  That so many patterns of male/female interaction would remain unaltered, was an outcome I could never have predicted. 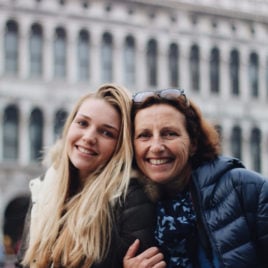 10 Compliments You Need to Give (and Accept) with Gratitude