This is it. This is the moment we saw off in the faraway distance when we strapped those wee little backpacks onto wee little preschool or kindergarten backs. Senior year is the end goal, the level-up. The last year. 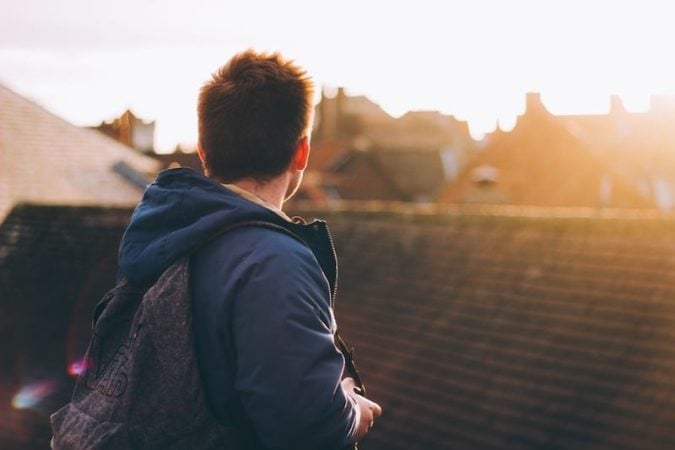 It’s an insane time of year if you have a high school senior in your family. Senior year, from a parents’ perspective, is like a giant, out-of-control, no-brakes freight train…a powerful, soot-stained steel bullet careening towards you, black plumes of smoke billowing into the sky and there is absolutely nothing you can do to stop it.

This is also the time when parents proudly announce, in real life and on social media, which college their progeny will be attending come fall. Your Facebook feed becomes a veritable avalanche of pictures featuring smiling kids donning their future alma mater colors. Hearty congratulations are passed around like cigars in an old-timey maternity ward. Their futures are so bright, so shiny!

Parents talk about how proud they are, and rightfully so. College is indeed an honorable next step after high school. Some might say the natural, right one.

But guess what? All teens are not ready for college. And that’s okay, too. In fact, sometimes it’s the best, smartest and most reasonable step.

This year, I am the parent of a college-bound kid. As I was two years ago as well. Four years ago, however, I wasn’t.

My eldest child did not go to college. In fact, he didn’t even apply to any. Back then, I felt something that was an awfully close cousin to embarrassment. Failure even. Not on his part- no! I felt like a loser parent who hadn’t pushed hard enough, who hadn’t followed the carefully laid out steps to get my kid into college. What I wish someone had told me back then, was what I’m laying down for you now.

Not all kids go to college. And that’s okay.

Not all students are ready for college

There is the matter of readiness. Some kids are, some aren’t. Don’t we all know of the boy/girl who left for school only to come home after a semester or two? When I was 18 I was nowhere near ready for college. I was immature and spacey and had so much growing up to do. I took a year off but that proved to be not quite long enough. Dropped out midway to pursue a career as a flight attendant.

Again, nothing wrong with that profession but guess what? That wasn’t my calling either. I kind of fell into my longest-running gig, motherhood, and put my education on one of those out-of-sight back burners. Which, once I found myself divorced and poor, was not the best choice I could have made. I am a life lesson, folks.

What was once an easy choice to make is now one fraught with scares and complications. Money, of course, is the biggie. There are articles and essays everywhere about the cost of college and who’s supposed to pay it. Some parents have had the good fortune and the foresight to put money away for their future scholar. Others, like yours truly, couldn’t have done it no matter how good our intentions were.

College is expensive. Horrifyingly so. Even if your kid goes to a local school, a state school, it isn’t cheap. If you are one of those who have been socking away a bit of each paycheck, good for you! Way to go. You’ve given your kid a great head start. Even luckier is the child who has grandparents or other relatives who want to foot the bill. What a gift.

There are countless scholarships and grants, but most of the time those just take some of the squeeze out of that tuition bill. The unfortunate reality for many college students now is having to take out loans. I don’t know about you, but the thought of sending one of my kids out into the world with a huge debt on their shoulders doesn’t sound awesome. Especially when you look at what fresh college graduates are making (depending on their chosen career path).

I wish I could go back in time and be a bigger cheerleader for my firstborn. He knew he wasn’t ready for college and, armed with that knowledge, he took his time. What we used to call “taking a year off” is now called “gap year” and in my son’s case, it was a gap-and-a-half. Almost two gaps.

He lived at home. He worked his ass off. He saved money and grew up a little and took time to think. And when he was good and ready, he signed himself up at the local community college. Most of it was covered with grants and scholarships, the rest he paid for. Eventually he applied to transfer to a private four-year college here in Minneapolis and that’s where he is today. He’s not on the four-year track, or even the five-year one.

He’s on HIS track. And I couldn’t be prouder.

Each teen, even within a family, is on their own path

I have one more kid left, and I’m beginning to gently encourage him to look into other post-high school options. You know why? Not because I don’t think he’s “college material”, but because I don’t think he’s ready. Not by a long shot. Who knows what the next two years will bring for him, though. He might wake up one day and be all rah-rah about it, and if so, I will support him 100%.

But, he might not. And that is something I will also support completely.

Look. This isn’t an anti-college rant. I believe in education and it’s something I’ve harped on about for so long my kids can recite the speech verbatim (it goes something like “look at me! Don’t be me! Find something you like to do and finish your education!! USE ME AS YOUR WORST CASE SCENARIO!!”).

Nobody can argue against getting educated. A degree is never worthless…this is something any of us who work for a living can tell you. I’ve seen people get jobs simply because of that piece of paper, beating out other candidates who are armed with many more years of experience. And if degrees talk, then advanced degrees shriek, people.

But. There are so many other options out there. Options that might not strike our college-happy society as brag-worthy, but are honorable and smart nonetheless.

Like I tell my kids: there will always be things that need fixing. Cars, plumbing, appliances, houses. People will always need haircuts and clothing and food. Our military is all volunteer.

I know people who work at Costco making more money and with better retirement packages than some people with advanced degrees. A quick Google search will show you endless success stories of people who have made it big without college.

It can happen. And for some people, it does. That doesn’t mean I think college is irrelevant or a waste of time and money. Quite the opposite. But it depends upon the person. It’s a very case-by-case scenario and a very personal one at that.

So to those of you who aren’t already thinking about dorm room purchases or how it’s going to feel when you hug your college freshman goodbye, know that your kid has probably already made one of the smartest decisions of their life.

Be proud of them.

When My Son Decided Against College I Felt Like a Failure Jennifer Ball is a writer, a mom and a dog person who used to have really pretty feet. Her work appears sporadically on her blog, Happy Hausfrau. blogspot.com/ and has been featured on The Huffington Post, The Today Show, Family Circle magazine and in the Listen To Your Mother anthology published by Putnam. When not working at her full-time job or trying desperately to keep up with her TV shows, she enjoys drinking martinis and following drama in comment sections. Find her on Facebook and  Twitter  and Instagram. There’s also a really good chance you can find her at either Target or Costco.