When parents send a son or daughter off to college for the first time, they face a new reality at home punctuated by a deep sense of loss and confusion. Empty bedrooms. Uncluttered floors.  A car in the garage – filled with gas.

How to deal with this new reality is a difficult question. When my daughter left for college last August, I received all kinds of advice from well-meaning and seasoned parents: dive into projects at home or at work, find that hobby you abandoned when you gave birth, rekindle your joy of reading, redecorate a room (but not her room, not yet).

[More on the big talks to have with your teen before you take them to college.]

I found my solace in the most unlikely of places – Netflix. Or, more specifically, the Gilmore Girls series. After driving seven hours through five states – and tears – I arrived home feeling anxious and distracted. As a stress eater, I feared gaining yet another freshman ten (or fifteen as they now call it). I turned to my treadmill and remote control.

After just one week on the treadmill, I was deep into the relationship between Lorelai Gilmore and her daughter, Rory. This mother-daughter duo has an incomparably close relationship, and, though the differences between their fictional family unit and mine are many, I found comfort in their rapport. It reminded me of my relationship with my daughter, which I like to think (or perhaps fantasize) is almost as close as Lorelai and Rory’s.

As I walked my way through seasons 1 and 2, I began to see muscles in my legs that I had not seen since high school track. I practically sprinted through Rory’s high school years and, before I knew it, the time had come for her to leave home and go to college.

Rory’s departure hit me hard. I am embarrassed to admit that I had to stop the treadmill more than once to find tissues. I felt an overwhelming empathy toward Lorelai as she helped Rory pack for college. I recognized her bewilderment when she arrived on campus to drop off Rory. And I knowingly smiled when I saw her panic over what they had forgotten to pack. Just a few weeks earlier, I had rushed to Bed, Bath & Beyond to rectify our packing shortcomings. Surely the writer of that episode had walked in my shoes.

As I continued through Rory’s first semester, I saw parallels to what my daughter was experiencing in college. Gilmore Girls accurately captured the feeling of isolation that comes with finding yourself in an unfamiliar place full of unfamiliar people. Like my quiet and reserved daughter, Rory found it difficult to “put herself out there” and meet new people. Her experiences demonstrated the awkwardness of making new friends and the difficulty of rooming with strangers.

Fortunately for my daughter, she knew a few people on campus who helped her navigate the first couple of weeks, and her circle of friends expanded from there. Her roommate, while not her best friend, was nonetheless much easier to live with than Rory’s roommate, Paris. Pounding the treadmill, I could only hope that my daughter’s first foray into the college party scene was as innocent as Rory’s.

I was addicted to Gilmore Girls, but at least my anxiety had decreased. Of course, I could not attribute my newfound mental stability to Gilmore Girls alone. My daughter had done the hard work of finding her way in college. Pictures on Facebook showed her smiling with other students. She was making friends, having fun, and (hopefully) studying. By the time Family Weekend came, my husband and I were welcomed but not needed.

I finished the series sometime during my daughter’s second semester. She’s now a sophomore, and college has become her “home.” She has a new roommate, a new boyfriend, and a new schedule of classes. I know from Gilmore Girls that many things can still go wrong. I hope that, unlike Rory, my daughter’s last years of college will not involve incarceration or court-mandated community service. I also hope she does not follow Rory’s example and take a hiatus from school (her grandparents have neither a pool nor a pool house, so I think we are safe). But I do hope we are able to maintain our relationship, despite our physical distance, just as Lorelai and Rory did.

I was excited to hear that Gilmore Girls – after a nine-year gap – is returning to the small screen (via Netflix.) The four-part series will reveal one more year in the life of Lorelai and Rory. But I am also terrified. Rory is an adult in the “real” world now. I’m not sure I’m ready for that, at least not as far as my daughter is concerned. 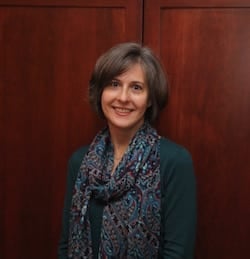 Patti Kennedy is a lawyer who likes to read and write in her spare time. She lives near Philadelphia, Pennsylvania, with her husband, two teenagers, and a crazy dog named Lucky.